Pakistan skipper Younis Khan announced his retirement from the T20 format cricket after leading his side to an emphatic win over Sri Lanka in the ICC T20 World Cup finals at the Lord's on Sunday.
Younis will continue to play in test and ODI formats for Pakistan.

Shahid Afridi's sensible yet electrifying batting, with a couple of boom-booms thrown in for good measure, helped Pakistan overtake Sri Lanka's modest score with 8 balls to go, and bag the Championship. With his outstanding bowling throughout the tournament, and great batting towards the final stages, Shahid Afridi has risen to iconic status that was reserved for the likes of Imran Khan in a nation troubled by conflicts for so long.
Afridi's unbeaten 54 and a wicket of the very last ball, earned him the Man-of-the-Match award. He hit two sixes and two fours, and the winning runs, after which he stood and saluted the thousands of elated Pakistani supporters in his usual trademark style. It was the second global one-day title for Pakistan after Imran Khan's side rallied in similar fashion to win the 1992 50-over World Cup. Pakistan lost the inaugural Twenty20 final in 2007 to India. 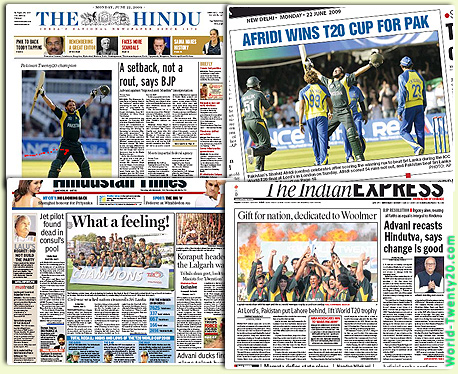 Sri Lanka had effectively lost the match in the first six powerplay overs, after they were down 32 for 4. A captain's innings from Kumar Sangakkara and a late charge by Angelo Mathews (partnership of 68 runs in 43 deliveries) boosted Sri Lanka to 138 for 6. Abdul Razzaq claimed a wicket in each of his first three overs, removing Jehan Mubarak for a duck, Sanath Jayasuriya for 17 and Mahela Jaywardene for one.

On Sunday, July 21st, the two best bowling sides in the second edition of the World Twenty20 - Pakistan, the mesmerizingly over-achieving underdogs and Sri Lanka, the remarkably professional and well oiled machine - meet in the finals at Lord's. While two Pakistanis - Umar Gul and Saeed Ajmal - have picked up 12 wickets apiece in the tournament to top the bowling charts, Sri Lankan mystery spinner Ajantha Mendis (with an outstanding economy rate of less than 5 runs an over) and fast bowler Lasith Malingahas also have 12 wickets apiece. But their bowling strength is deeper, with Muralitharan and Angelo Mathews taking 13 wickets between them at less than a run a ball. For Pakistan, the surprise package has been Shahid Afridi, who picked up 10 wickets in the tournament so far, conceding just 5.37 runs per over.

Batting is one area that worries Sri Lanka. Other than Dilshan (with 317 runs at an average over 60), Jayasuriya (160 runs), Jayawardene (153 runs) and to an extent, Sangakkara (just 113 runs), no one else has contributed much with the bat. The one area where the Lankans do excel over Pakistan is their fielding.
The Pakistan batting averages just 138 as a team, with no one shining in particular, but everyone contributing in bits and pieces. Captain Younis Khan (172 runs) and Kamran Akmal (151 runs) are the leading batsmen.
With both sides preferring to bat first, the toss will be crucial. The last contest between the two finalists was in the Super Eights at Lord's when Sri Lanka beat Pakistan by 19 runs. Sri Lanka made 150 for the loss of 7 wickets as Dilshan and Jayasuriya put on 81 for the first wicket in 9 overs, with the rest of the side adding just 69 more from the 11 overs that followed. Despite a 37 ball 50 from Younis Khan, Pakistan lost too many wickets to Malinga and Murali and ended up 19 runs short of the target.

Shahid Afridi shone with bat and ball at Trent Bridge as Pakistan dumped South Africa by seven runs to storm into the World Twenty20 final. Boom Boom smashed 51 from 34 balls and then grabbed 2-16 with his leg-spin as Pakistan successfully defended 149-4 to restrict the favoured Proteas to 142-5 before a sell-out crowd.
Afridi, coming on to bowl in the seventh over, struck twice in four deliveries when he bowled Herschelle Gibbs and AB de Villiers to make South Africa 50-3 in 8.3 overs. Veteran Jacques Kallis made a brave attempt to take the South Africans home, striking seven fours and a six in 64 from 54 balls, but the other batsmen faltered against the spot-on attack.

South Africa is one of the only two teams in the 2009 ICC World Twenty20 to reach the Semis without losing a single match (Sri Lanka is the other). The perennial favorites in any form of cricket, and big time chokers at crunch time, South Africa will have to overcome their nerves to go on to the semis when they meet a resurgent Pakistan team which is looking stronger and stronger with each match. AB de Villiers is currently South Africa's top scorer with 185 runs in five matches, and teammate Jacques Kallis is not far behind with 174 from four matches.
Seamer Roelof van der Merwe is the team's best bowler with 9-106 from 17 overs, while Wayne Parnell has 8-93 from the same number of overs.
Right-arm seamer Umar Gul is the main reason the Pakistanis have progressed so far in the tournament after a stuttering start. Gul, who was the highest wicket-taker in the inaugural World Twenty20 in South Africa when Pakistan ended runners-up to India, again tops the list with 12 scalps in this tournament. Off-spinner Saeed Ajmal is joint second with Sri Lanka's Lasith Malinga in the wicket-taker's list with 11 wickets, while leg-spinning allrounder Shahid Afridi has eight. Pakistan were routed by South Africa in a practice match ahead of the tournament at Trent Bridge, losing by 59 runs after being bowled out for 127 in reply to South Africa's 186-7.

Sri Lanka, the unbeaten, strongest, and best balanced team in the tournament, will face West Indies in the second semi-final at the Oval on Friday. Three of Lanka's big four batsmen have been in form, with the opening partnership of Sanath Jayasuriya and Tillekeratne Dilshan performing consistently well. Sangakkara and Mahela Jayawardene showed in the match against New Zealand that they have the class and composure to lead their side to victory on the big stage. Dilshan is the tournament's top runscorer.
While spinner Ajantha Mendis is an absolute terror, veteran spinner Muttiah Muralitharan has been successfully strangling sides in the middle overs. Mendis already has 10 victims in the tournament while sling-shot fast bowler Lasith Malinga lies joint second in the leading wicket-takers in the tournament with 11 and are expected to provide the main obstacle to West Indies' chances of progress. West Indies skipper Chris Gayle, after beating England in a do-or-die match went on to remark that some teams were now scared of his team. Dwayne Bravo, with 154 runs from 4 matches and eight wickets for 123 runs from 14 overs, has been the best all-rounder in the tournament so far. Lendl Simmons with 150 runs from 4 matches is also in terrific form.

A sensational five-wicket haul for just 6 runs in 3 overs by Umar Gul helped Pakistan defeat New Zealand by six wickets to keep their semi-finals hopes alive in the World Twenty20.
The Kiwis were all out for a paltry 99 in 18.3 overs, after they won the toss and decided to bat first at Oval. After being introduced in the 13th over, Gul wreaked havoc in his three-over spell and emerged the first bowler ever to claim five wickets in a T20 international.
Pakistan coasted home to finish on 100-4 with Shahzaib Hasan making 35 and Shahid Afridi 29 not out.

Sri Lanka survived a mid-innings slump and a threatening 66-run partnership between Younis Khan and Misbah-ul-Haq to ease to a 19-run win in their first game of the Super Eights at Lord's. Sanath Jayasuriya (26) and Tillakaratne Dilshan (46) put on 81 for the first wicket but then lost 6 wickets for 69 runs to Shahid Afridi (2 for 23) and Saeed Ajmal (2 for 26) as they slumped to 150-7.
Lasith Malinga (3 for 17) and Muttiah Muralitharan (2 for 28) were able to restrict Pakistan to 131-9 with Younus Khan positng 50.

June 12 Preview: Pakistan vs Sri Lanka, India vs West Indies at the Lord's

Pakistan take on Sri Lanka in a Group F match at Lord's on Friday at 18:00 IST which is an important match for both teams. Pakistan has so far shown they can play like winners or losers, depending on the mood of the team. Shahid Afridi's bowling (with his 4-11 against the Dutch ) has picked up, but his batting style has been ridiculed by everyone since the tournament started. Sri Lanka on the other hand are fresh from two morale boosting victories over Australia and West Indies. Batsman Dilshan and veteran all-rounder Sanath Jayasuriya have both already recorded big scores with the bat. India meet Windies in the second match, scheduled to start at 22:00 IST in a Group E match. Belonging to the toughest group, a win or loss can mean moving to the semis or going home. T20 World Champions India barely had to break sweat progressing from their group with comfortable wins over Bangladesh and Ireland. West Indies on the other hand are inconsistent, depending too much on Captain Chris Gayle's batting. His 88 from 50 balls led the team to a crushing win over Australia, while they lost pathetically to Sri Lanka while Gayle rested, due to an injury.

Comprehensive victory for Pakistan at Lord's

Pakistan needed to beat the dark horses Netherlands by a 25 run margin if they wanted to stay alive in the World Twenty20. And they demolished the men in orange by 82 runs.
Pakistan, who were low in their confidence after losing their game against England by 48 runs, looked lost till the middle overs, when Afridi started picking up wickets in qucik succession. His 4 wickets in 4 overs giving away just 11 runs made sure they move into the Super 8s with England from the same group. Man of the match Kamran Akmal effected 4 stumpings, 1 run out and scored 41 off 30 balls in a Pakistan score of 175/5.

England crushed Pakistan by 48 runs in a group B death match after messing up their tournament opener with minnows Dutch. Kevin Pietersen, returning to the side after losing the match against the Dutch, hit 58 off 38 balls to help his team reach 185 for 5.
In reply, Pakistan's batting was lackluster, and no one seemed interested in putting up a fight. Younis Khan top scored with 46, while Broad picked up 3 wickets for 17 in 3 overs.

In the final warm-up game, India beat Pakistan in an emphatic fashion in front of a packed house at the Oval. Pakistan started strongly, with the young Ahmed Shehzad scoring 25 off 19 balls with 5 fours, but Ishant Sharma's first over, a 2 wicket maiden, changed the course of the game.
India, riding on the first wicket partnership of 140 between Rohit Sharma and Gautam Gambhir in 16 overs, took the match away from a wayward Pakistan attack.

South Africa played better in every department of the game to beat last year's runner-up Pakistan comprehensively at Trent Bridge.

Free Windows 8.1 App: The latest Cricket news from your favorite websites. You can also add new RSS feeds based on your interests to see them all in one place. Works on any device that supports Win 8.